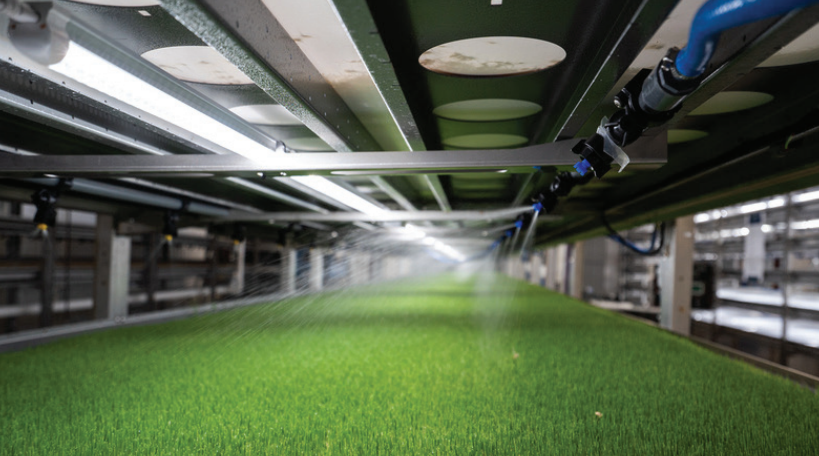 To save our planet and ourselves, we must use our existing agricultural resources more efficiently. Farmers around the world want nutritious livestock feed for their animals and better farm performance. Innovative indoor growing solutions address problems like emissions, waste, water shortages, and land scarcity issues, providing options that help protect future generations.

HydroGreen Inc., a division of CubicFarm Systems Corp., was founded by farmers. HydroGreen’s Automated Vertical Pastures™ technology enables farmers to grow nutritious fresh livestock superfeed at a commercial scale in any climate, year-round. This technology was designed for farmers and ranchers operating in areas with low precipitation where water scarcity and extreme drought significantly impacted their ability to feed their herds. It was a solution to a problem, and while ag-tech may have been a nice-to-have, it’s quickly become a necessity. 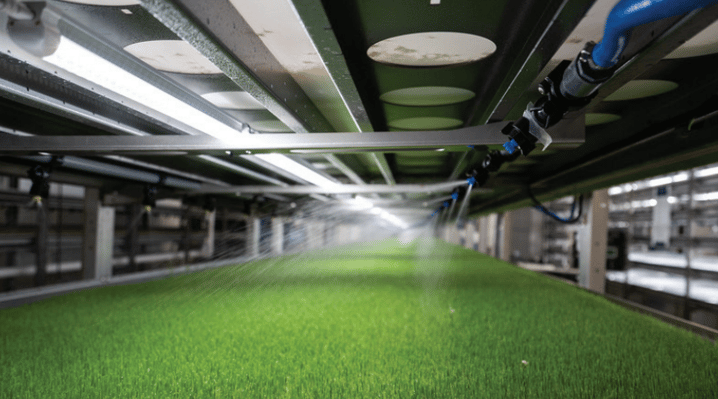 Approximately 70% of all agricultural land is being used for some aspect of livestock production.

Approximately 70% of all agricultural land is being used for some aspect of livestock production. Beef and dairy farming represents approximately 14.5% of all human-induced greenhouse gas (GHG) emissions. Feed production and animal waste represent the two largest sources of these GHG emissions, representing 45% and 39% respectively.

Hydroponic fodder and greenhouse gas emissions: a potential avenue for climate mitigation strategy and policy development was published by Canadian Science Publishing in FACETS, the official journal of the Royal Society of Canada’s Academy of Science. This scientific research was developed through a collaboration of academic researchers and industry experts. It warns of the imminent pressures on our food systems through demand for consumption of animal products, which are becoming more apparent as our global population increases, with estimates suggesting a global population of almost 10 billion by 2050.

“Finding solutions like the HydroGreen hydroponic growing system that can lower overall GHG emissions caused by livestock will be critical to solving the world’s GHG emission problems and reduce the overall effects of global warming,” commented Dr. Newman, a co-author of the study. “This latest research estimated that the HydroGreen demonstration farm produced 7.4% fewer GHG emissions (per nutrient mass) than were found with conventional barley grain fodder farming, and greater reductions can be achieved with improved seed-to-fodder output, indicating that transitioning to such systems can result in GHG reductions and (ultimately) climate mitigation benefits. These are exciting findings and a bright light in the otherwise gloomy world of climate change.”

As more farmers transition toward sustainable agriculture, immediate solutions are needed for reducing the impact of livestock industries by improving farm performance and reducing waste. Using less water began as a key measurement for the HydroGreen technology because it was originally designed for farmers and ranchers operating in areas with extreme drought conditions. “Growing indoors in our system uses 95 percent less water than traditional central pivot irrigation systems that farmers typically use,” said HydroGreen President Dan Schmidt, cautioning that this figure depends on the location of the farm and the kinds of climate conditions where the farm operates.

The larger Automated Vertical Pastures™ commercial-scale system saves 500 million gallons of water per year. Growing up to 25 million pounds of fresh feed annually, this technology uses less than 1/10th of the water used for feed grown in irrigated fields. That’s enough water to give one glass to every single person on the planet.

“Water availability is an increasing concern in our industry and this technology is part of the solution,” said Jay Burnett, co-founder of Burnett Land & Livestock in Carpenter, Wyoming. Burnett’s operations include over 17,000 cattle on 35,000 acres across the Midwestern and Western United States. Construction is well underway on a dozen Automated Vertical Pastures™ modules at Burnett’s and will be the largest automated indoor fresh livestock feed system in the world.

In the initial stage at Burnett’s, the system will feed about 2,000 animals, producing 16,000 pounds daily of dry matter, or 25 million pounds as fed annually, which is enough to support 2,000 cows daily producing nearly 20,000 gallons of milk every day. As a scalable, modular system, Burnett’s can accommodate a second Vertical Pastures™ expansion or more as needed and is a reliable solution to feeding thousands of cattle—without needing or using thousands of acres of land. 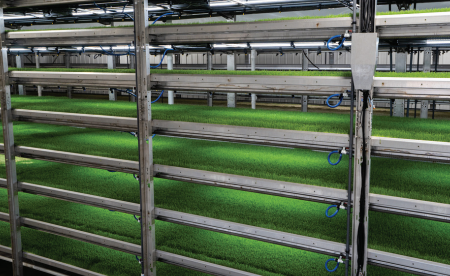 Even with better farm performance, fewer GHG emissions, and less waste, there remains the issue of limited land availability and increasing land prices. Each year, 12 million hectares are lost at an unprecedented rate of 33,000 hectares per day. Between 1982 and 2001, approximately 34 million acres of open space were lost to development, at a rate of 6,000 acres per day. For farmland in the U.S., 31 million acres of farmland were lost between 1992 and 2012, primarily caused by the expansion of cities and suburbs, followed by the development in rural areas. The larger Automated Vertical Pastures™ commercial-scale system maximizes land efficiencies, replacing 500 acres of farmland—equivalent to 378 football fields. For farmers who cannot expand their farmland or want to get better performance from what they have, hydroponic vertical farming provides a sustainable and profitable solution when there’s nowhere else to go but up. 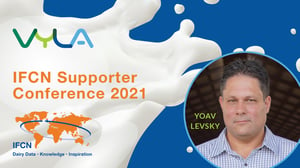 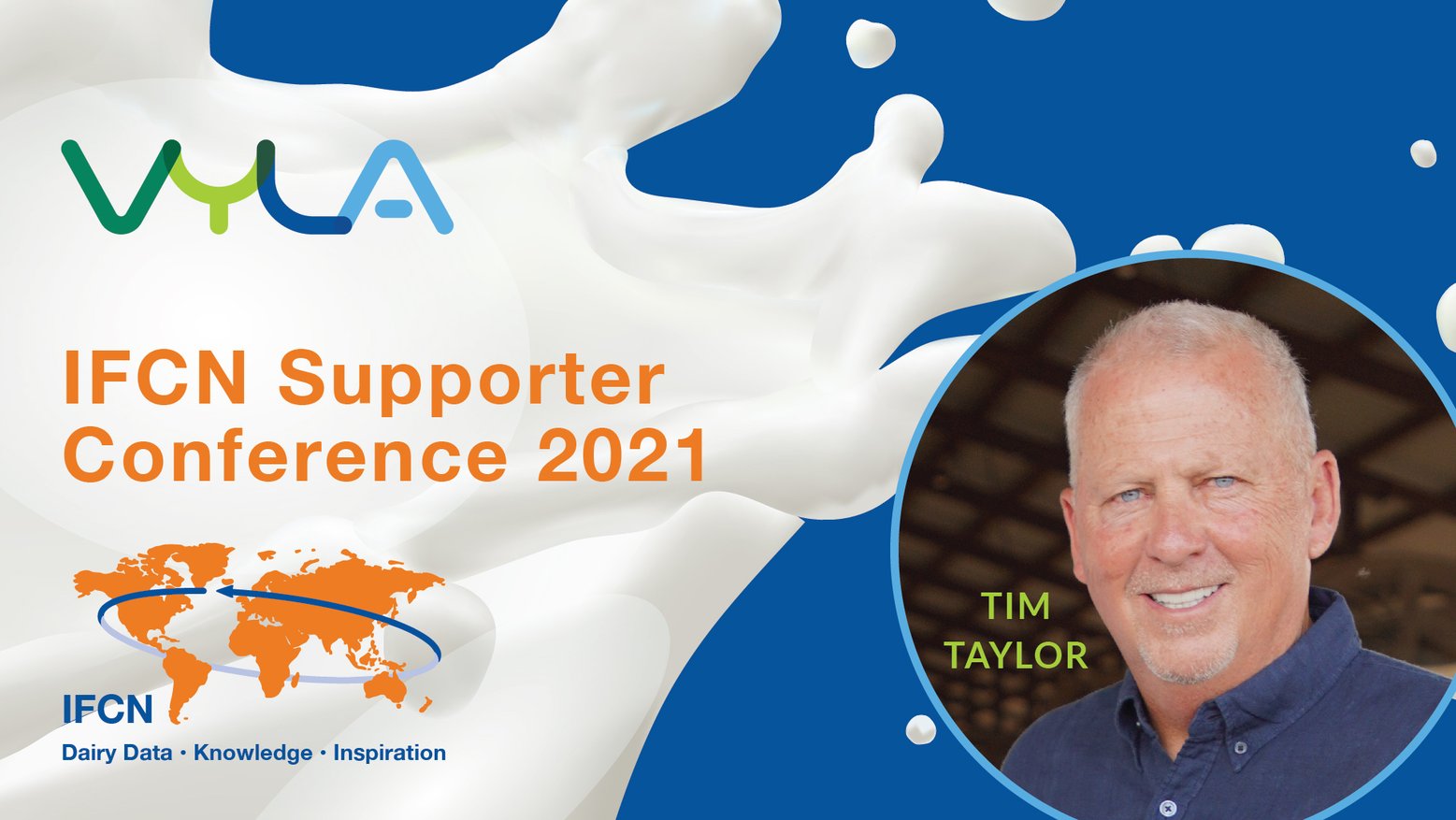 Taylor’s tech background informs his approach to dairy. Through thinking globally and...

Levsky’s vision of sustainable dairy can take on the industry’s two biggest...